﻿Under the Full Moon﻿ 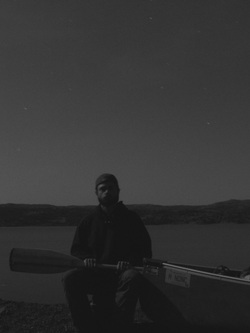 The moon rose over the hills. Only the moon and the stars, there is no other light – no farms, no ranches, no campgrounds, no towns. Even a distant campfire would let me know someone, anyone, is out here. It’s dark. I’m alone.

I trace the contours of the hills with my eyes. They undulate and roll towards the lake. Where they’re covered in grass, the moonlight rests pale blue. The groves of trees appear as a single pool of blotched ink, much like the water. Under the moon, the terrain is a contrast of light, dark and darker.

Rarely do I see or hear any animals. On occasion, coyotes yip and bark, their cries piercing the darkness and echoing across the lake, but I never see them. Fish thrash near the surface when my canoe surprises them as it glides across the sombre water. The fish are a paddle’s length away when they splash. They startle me. I jump, then laugh. I don’t see them either, only ripples.

The water is black. The colour isn’t scary, but the illusion of depth is. A primal part of me believes the dark lake is as deep as the ocean and more menacing. A nervous jolt fizzles in my heart. I repeat to myself why I’m canoeing at night. Logic and reason eventually sooth my animal fears.

Loneliness aches in me. Travelling alone at night feels unsettling, even taboo. My instincts don’t want to allow it. But paddling during the day isn’t an option. The hot wind makes paddling too slow and far too aggravating. The loneliness has been challenging, but I’m very happy with the progress. The moon and northerly night wind have been very helpful. I travel much, much further at night.

The radio is my saviour. And not just because it tells me the best times to travel or to take shelter. The electronic voice that repeats the weather reports doesn’t exactly sound like a person, but close enough, it’s talking to me, or so I pretend. The AM stations crackle as their signals drift from California, Oregon and Washington. The FM stations are clear, but local. Traffic reports from cities I’ve never visited, pop music I hate, call-in shows about subjects that bore me – I eagerly listen to them all and experience an ersatz connection with people.

One broadcast was a bit far fetched, but highly entertaining. It was a call-in show about demons and dark angels. The host’s voice was too intense to be serious, but not so intense to suggest ridicule. He was trying to scare his listeners, but couldn’t. They phoned him with titillating stories of the supernatural and the background music was grave, then shrill. I heard a moan, then glass breaking followed by disjointed, deep, random notes on a piano. Alone in a dark world, surrounded by black water and shadows, the music started to scare me. I turned off the radio. The silence was loud and brooding and unsettling. I preferred the creepy music and turned the radio back on.

The Native radio stations play oldies I sing along to. This is very comforting, like a fire on a cold day. Certain favourite songs even warrant a dance. There's not much room to dance in a canoe, but enough to shimmy, shake and rock the boat from gunnel to gunnel. I like the pow-wow music. The strong drumbeats encourage me to paddle harder. For some songs, I drum along and beat the side of the canoe with my paddle. The sharp echo concusses against shore and bounces back to me like a visitor knocking on my door.

George Jones may have the most haunting voice in country music. His “Who’s Gonna Fill Their Shoes” filled the silence and darkness of night. His ability to capture emotion leaves me in awe. I’ve been waiting for Alan Jackson’s “Thank God for the Radio”, but haven’t heard it yet so I sing it to myself.

The cool light of the moon guided me to Dodge Draw, a recreational facility that isn’t much more than a boat ramp and an outhouse. I moored to the dock and walked around to warm myself. The temperature was close to single digits. Feeling cold and hungry, I ate supper. This brought relief, but then a wave of sleepiness permeated my body. I wanted to keep paddling, but couldn’t concentrate or walk without stumbling. I hated to stop. After all, there was no wind. But a nagging awareness insisted I was too tired to continue safely. There’s no one out here except me. Self-rescue is doubtful when I’m this tired. Plus, my fatigue increases the likelihood of a bad decision or mishap. Reluctantly, I weaved and teetered toward the dock to get my tent and bedding.
Get Your Copy of the Book