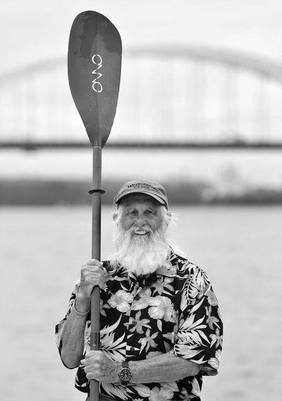 Dale Sanders, Memphis. (He is the oldest person to canoe the Mississippi River, click on his photo to learn more.)
It’s good to have a plan, but sometimes it’s best to just go with the flow. My plan had been to stay in Memphis, Tennessee long enough to buy groceries, check my emails at the library and visit Graceland. None of that happened.

The Memphis skyline appeared before me on the morning of December 13. The sun rose higher in the sky as my paddle propelled me forward. The buildings got closer. By noon I could see people walking in a riverside park and by 12:30 one of them shouted, “Are you Dom?”

I was shocked. I don’t know anyone in Memphis, let alone this man who appeared to be in his mid 70s. The man had a long white beard, the kind Santa has. I went to shore wondering who this bearded man was and how he knew where to find me.

“I figured you’d be here between twelve and one,” he said. “Looks like my timing was pretty good.”

I had heard about Dale from people I met along the Missouri River, but I didn’t know he lives along the Mississippi. I never expected to meet him. Dale had heard about me too and was tracking my trip online. He knew that I upload my campsite’s location to my website daily. Dale looked at where I was camped last night and could judge by the speed of the current what time I’d be in Memphis. Impressive, to say the least, considering how easily he can calculate ETAs on America’s largest river.

He invited me to stay with him and his wife Miriam, but I hesitated. It was a little strange that he had gone so much out of his way to meet me, but the more I talked with him the more I understood that he takes canoeing very seriously. Dale began canoeing in 1954.

The couple made me feel very welcome. They invited me to attend their service, which is in one of the largest Southern Baptist churches in the United States. I was hoping it would be one of those churches where the assembly responds enthusiastically to the preacher by saying, “Amen, hallelujah!” or, “Praise the lord, Brother Johnson!” It wasn’t. But it was still interesting.

I spent four days with the Sanders and met their children and grandchildren. Dale took me canoeing in a swamp then we toured Memphis with stops on Beale Street, home of the blues, and at the Rendezvous, a famous BBQ restaurant. When it was time for me to continue my trip, I was glad I hadn’t politely declined Dale’s hospitality. Sticking to the plan wouldn’t have been a good idea.

I canoed out of Memphis on the morning of Dec. 17. There was no way I would arrive in New Orleans for Christmas, as I had originally planned. The best I could reasonably hope for was to arrive in mid-to-late January. I would celebrate the holiday season on the river. I didn’t know that my Christmas would be spent hiding from tornadoes.
Get Your Copy of the Book